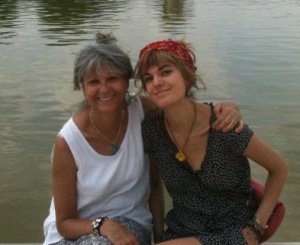 Us at the Tuileries Garden in Paris, 2011

I’m a woman of a certain age. OK, I was born in 1951. Yeah, I’m old. That’s the bad news. The good news is that I’m a Capricorn so I’m forever young, or so they say. I raised my daughter, who is now in college, single-handedly*. Yay her! Yay me! She rocks my world and is truly my raison d’être.

*That’s a bit of a stretch … I had help from the village people: friends, family, her father.

Don’t hold it against me, but I was born and raised in Texas (Houston area) and lived there until I moved to Tucson and then to Denver and then to Boulder – in my early 20s. I’ve lived in CO for many years but I guess I’m still a Texan. You can take the girl out of Texas but … you know the rest.

I graduated from college (University of CO Denver – UCD) with a B.A. in English Literature, Minor in Writing and the job I defaulted to when all else didn’t pan out was/is administrator (a cog in the wheel of atmospheric science) at NCAR. (Not NASCAR, NCAR.)  I was going to say it “pays the bills” but I’d be lying.

I wanted to be a medical anthropologist and then later wanted to go back to school when my daughter was little and get my Masters in Education, but none of that worked for various reasons. In reality, all I ever wanted to do my whole life was own a bookstore. Born a bibliophile (genetic?), I put myself through college working at bookstores (along with waiting tables).

I got close to my dream about 6 years ago – even had a location and business plan – but realized I would have to keep my day job. Why bother? And plus, it was right before the economy went up in flames, so in hindsight, it was fortuitous I didn’t take the risk. Bitter pill, though. Geez, I just know I would have been happy. Plus aren’t brick-and-mortar stores a thing of the past? Not just indies, but the chains too? Or are they evolving into something more nimble? Did I just say “nimble”? Was I subconsciously thinking, “Kindle”?

Oh. Back to me. I think that’s it. You can ask me anything. I’m pretty good on advice. I’m not very good at marriage advice but I’ve given myself a PhD in “Relationships”, so I think I can at least fake a good response.  I was married once – got inoculated early on – and after divorcing in my early 20s, I swore I’d never go there again.  Not to say I wouldn’t like a life partner — someone to enjoy the sunset with, as they say, it gets pretty lonely out here sunset after sunset, but I just can’t settle.  And I’ve never cracked the code on how (marriage) works. I truly don’t get how 2 strangers can meet on match.com and go out for 6 months and then decide to get married! It’s like another planet!  How does that work? I just don’t get it.

Writing. Sigh. I love to write. Writing is hard. It makes my head hurt. But it’s the thing that brings me the most pleasure and is the most self-fulfilling of anything else I do in life. Really. Well, maybe except for dancing. Or traveling the world.

Things I hate: the word “hate” but nevertheless, people who don’t know how to merge in traffic, people who get in their car to leave their parking space when I am waiting for their space and sit and talk shit on their phones for another 30 minutes, um … well, let’s just leave it at that for now.

I welcome commits, advice, jokes, quotes and any other wisdom (or anti-wisdom) out there anyone has to offer.