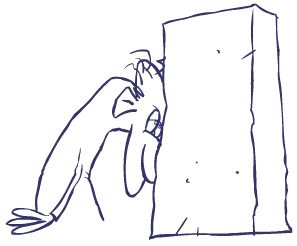 Now that I have a blog I can’t think of a damn thing to write about. It’s weird because in my pre-blog life  I was a regular letter-to-the-editor writer, often ranting about things that drove me crazy and once a short and sweet public farewell to Mr. Rogers. I had an on-going list of topics I wanted to essay about. (Yes, I just used a noun as a verb.)

But all of a sudden it’s like I’ve been handed a block of marble and asked to carve out the The Pietà. Just like that block of marble, my brain is frozen and impenetrable. And it’s giving me a headache.  No wonder they call it “writer’s block”.

I read blogs – stimulating and entertaining blogs.  Blogs that make me think, that move me, make me laugh, weep, amaze me, and sometimes altar, just slightly, my vision of the world.  So it’s not like I don’t have good examples to inspire me.

I keep going back to the dead sea scrolls, the archives of my writing past, to dredge up old stuff to dust off and post.  But the old stuff doesn’t fit in the present. It’s all sad and weary and a lot of it is, if I’m honest, just crap.

So here I am with time, a blank slate – a fucking BLOG! – and nothing to say. Really? Trying to break on through to the other side (apologies to Jim Morrison).

“The quality of mercy is not strain’d,
It droppeth as the gentle rain from heaven
Upon the place beneath: it is twice blest;”

– From Shakespeare’s The Merchant of Venice, 1596.

They appeared from out of nowhere. I looked up and they were there. Carrying food, wine, chocolate, coffee. Carrying firewood. Carrying their hearts. Carrying their love. Flowers began arriving and continued non-stop for a week along with the meals. The phone rang non-stop.

I was in shock. I had found my lover, my fiancé, my best friend, my daughter’s second father – hanging from a rope on a Saturday morning in February 2006. Lisa arrived from California on Sunday. I looked up and there she was – a vision. What was real? What wasn’t? Jody had called Lisa Saturday night and after Jody told her Andrew was dead, Lisa said simply, “I’m on a plane.” Lisa stayed and walked the walk of grief with me. It took a large toll on her to be so close to ground zero.

It was a record-breaking snowy and freezing cold week in February. Lisa ordered bottled water, cleaned the cat litter box, bought me Vitamin B-complex and more. We were all shell-shocked trying to get done what needed to be done daily, hourly. Functioning in a fog of grief and shock. Where was the step-by-step manual? There was no manual.

She drove, screened my calls, reminded me of what I couldn’t remember. The food and flowers and friends kept arriving. The tears of grief kept flowing. She listened to me tell my story over and over and over again to others who came, to those who called. To Andrew’s shattered family in Australia.  Lisa was with my daughter when we said goodbye to Andrew’s body in the morgue.

My three Michaels (Dixon, Greenberg, Houlik) came and went and were touch stones for me. Keeping the hearth burning, bringing food, firewood. Sitting Shiva with me and my daughter. A girl so young and blown apart – her world shattered into a million pieces.

My church friends came with food and prayed 24/7. Hundreds of friends came, called, sent flowers, emails and cards. I was lifted up and carried by friends and Grace – how else can I explain it? I was in an altered universe. Everything had changed, nothing was the same, yet the sun still rose every morning and set at night.

I was simultaneously broken in a fundamental way while enveloped by the love and grace of my friends. I learned what true friendship was – and was not. I was – and still am – brought to my knees by the powerful force of love and the quality of mercy.

This entry was posted in Uncategorized. Bookmark the permalink.

3 Responses to Food, Flowers and Friends and Writer’s Block